CLICK HERE TO LEARN HOW TO MAKE THE PERFECT HOMESCHOOL SCHEDULE!

Ever since we discovered episodes of CHOPPED online for free, we’ve enjoyed watching them as a family.  Many times, while sitting down to a meal, one of the kiddos would take a bite, critique the flavors, and declare whether or not the chef had been chopped.  (They are kind enough to never chop mom!)

A few weeks ago we decided it would be fun to play Chopped as a family and we thought all of you would enjoy seeing how we put it together and maybe try it with your family!

Our oldest four children were the chefs.  Daddy, Mommy, and the 4 year old were the judges.  If you are familiar with the show, you know there is an Appetizer round, a Main Course round, and a Dessert round, each with their own set of mystery ingredients.  One chef is eliminated (chopped) after each round based on presentation, creativity, and flavor.  The kids all agreed ahead of time that it would be okay to be eliminated from the competition if they were chopped.  (If they hadn’t agreed to this, we would have let all of them cook all 3 rounds.)

The night before, I planned out the mystery ingredients.  It also might be a good idea to have your kids go through this FREE KNIFE CLASS: 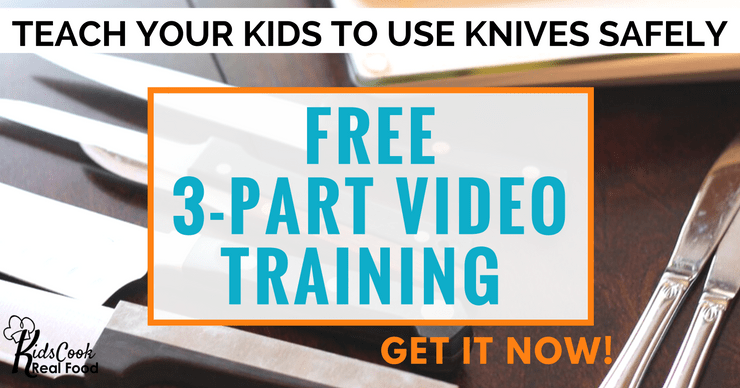 On the show each chef has a basket of ingredients for each round.  Our family version had us pulling from one picnic basket and the kids had to share the ingredients within.  Dad played the part of host and announced the ingredients as they pulled them from the basket.

On the show, the picnic basket always has at least one ingredient that is bizarre.  So, for instance, our Main Course round had:

By the way, if you do this, remember as a judge, you have to be able to eat whatever is put in front of you.  Plan your mystery ingredients with that in mind!

Once the mystery ingredients had been revealed, I set the timer and they got to cookin’!

At the end of the round, the children presented their dishes to us and explained what they had created.  The first round, we had them make 4 separate plates just like on the show (1 for each judge and 1 to be potentially chopped – more on that later), but we soon realized our kitchen does not accommodate 16 plates of food very well, so we decided to have them make 1 big plate for the judges to share and 1 small plate to be chopped.

After presenting their dishes, they headed back to the boys’ room where we had set up a card table and chairs and bottles of water (just like on the show!).

I have to tell you the kids did such a great job it was really hard to choose one dish to chop!  When we finally managed to make a decision, we brought them out and just like on the show, we had the “chopped dish” under a lid (in our case, a big ole roaster lid!).

The Dessert round had the 8 year old and the 15 year old competing against each other for the championship!

The last round is not judged solely on dessert, but rather a culmination of the 3 courses together.  The 15 year old won our version of CHOPPED, and took home the $2 cash prize!

We saw some really neat things from the children throughout the competition.  We saw them work together, we saw them get better at putting together their dishes with each round, we saw a ton of creativity.  But what really impressed us was watching our 8 year old in the final round make a caramel sauce based off of what she saw her brother doing.  She had no idea how to make a caramel sauce, but she watched and learned and tried her hand at it.

The entire event took about 2.5 hours.  We ate the dishes they prepared as our lunch that day.

The kids spent the rest of the day talking about how much fun they had.  In fact, they still talk about it excitedly and wonder when we can do it again!  So, if you ever have a free Saturday afternoon, grab a picnic basket, a few aprons, and some crazy ingredients from the pantry, and have a blast playing CHOPPED!

Previous Post: « Check out See the Light and Enter to Win a Cartooning DVD!
Next Post: They Grow Too Fast For My Liking »

How to manage a houseful of little ones!